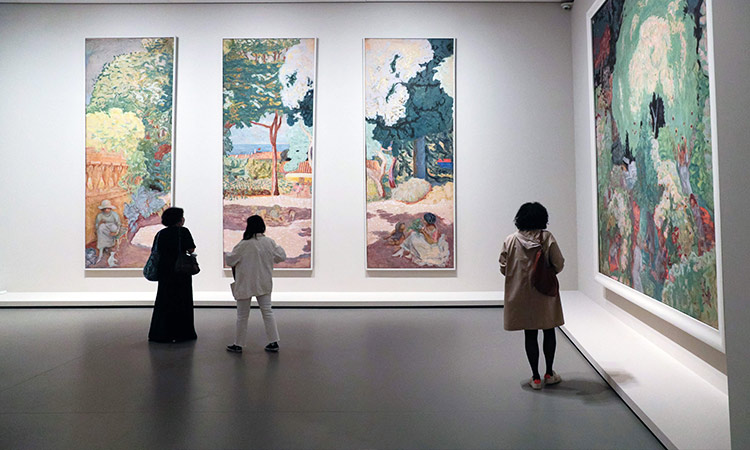 A woman looks at paintings by French painter Pierre Bonnard during a press visit of the exhibition “The Morozov Collection. AFP

An exhibition of masterpieces owned by a Russian art collector has attracted a near-record number of visitors in Paris, but the war in Ukraine may make it the last of its kind for a while.

The “Morozov Collection,” which includes works by Van Gogh, Cezanne, Matisse and Monet, clocked up 1.25 million visitors at the Louis Vuitton Foundation in Paris, the centre said Monday.

The collection was put together by Russian collector Ivan Morozov in the late 19th and early 20th century, and had never before been seen as a whole outside Russia.

The number of visitors to the Paris show fell just shy of the French record of 1.3 million set by the same museum in 2016 with the Shchukin Collection, which also featured treasures sent over from Russia.

“It is an exceptional figure given the obvious impact of the health crisis and the absence of foreign visitors, especially Asian visitors,” the museum said in a statement.

Two portraits will not be returned, however, as a result of the war in Ukraine and a seizure related to sanctions against allies of President Vladimir Putin, the French culture ministry said on Saturday.

One is a self-portrait by Russian artist Pyotr Konchalovsky owned by sanctioned Russian oligarch Petr Aven.

The other, by Russian painter Valentin Serov, belongs to the Fine Arts museum in the Ukrainian city of Dnipro, which has asked for it to remain in France until the situation improves.

The show ran at the Louis Vuitton Foundation from September 22 to April 3, having been extended from its initial end-date on February 22.

Everything to know about the new era of Emirates ID
- Advertisement -