Britney Spears with Sam Asghari at an event. File

Britney Spears has revealed that she is pregnant with her third child.

The Toxic singer, 40, announced she is expecting a child with her partner Sam Asghari on Instagram on Monday, where she revealed that she took a pregnancy test after gaining weight following the pair’s recent vacation to Hawaii.

“I lost so much weight to go on my Maui trip only to gain it back,” Spears wrote, adding that Asghari, who she referred to as her husband after they seemingly secretly married this year, suggested she was “food pregnant”. “So I got a pregnancy test … and uhhhhh well … I am having a baby,” she continued.

In the post, Spears then claimed that she may be expecting twins, with the pop star, who shares sons Sean, 16, and Jayden, 15, with ex Kevin Federline, adding that she “got a little more food pregnant”. 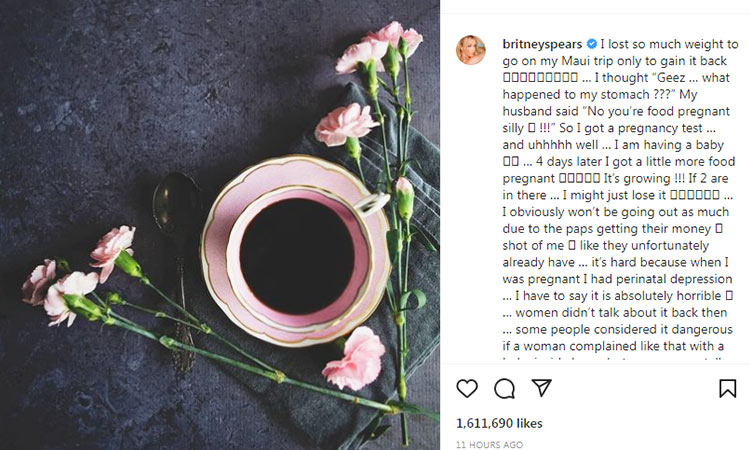 According to Spears, she will not be going out in public much, as she noted that she doesn’t want the paparrazzi to get their “money shot” of her pregnancy.

Spears then revealed that she suffered perinatal depression when she was previously pregnant, with the singer adding: “I have to say it is absolutely horrible.”

However, she did note that society has changed, and that it is now more common for women to talk about their struggles with perinatal depression.

“Women didn’t talk about it back then … some people considered it dangerous if a woman complained like that with a baby inside her,” Spears wrote. “But now women talk about it everyday … thank Jesus we don’t have to keep that pain a reserved proper secret.”

Spears concluded the post telling her followers and fans that she plans to do yoga every day during her pregnancy. “Spreading lots of joy and love,” she added.

Spears’ pregnancy announcement comes after she recently hinted at the possibility of having more children in a post shared to Instagram last month, in which she posed topless in the sea with the caption: “Planning on having babies in Polynesia.”

The post came after Spears alleged in a Los Angeles court hearing that she was not allowed to remove her IUD implant birth control device during her 13-year conservatorship, despite wanting to have more children.

“I have an IUD in my body right now that won’t let me have a baby and my conservators won’t let me go to the doctor to take it out,” she told the court in June 2021. “I feel ganged up on. I feel bullied and I feel left out and alone.”

“I want to be able to get married and have a baby,” she added.

In September 2021, Spears announced on Instagram that she and Asghari were engaged, just months before her conservatorship was ended in November 2021.

The couple, who first met in October 2016, later convinced fans that they had secretly tied the knot after Spears began referring to Asghari as her husband on social media.

Following the pregnancy news, fans have shared their support for Spears, with one person writing: “Baby one more time!!” while another said: “Omg congratulations, so happy for you.” The Full Guide for Salat Al Taraweeh
Next Article